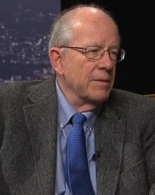 David R. Cameron is a Professor of Political Science at Yale and the Director of the Yale Program in European Union Studies.  He received his B.A. from Williams College, an M.B.A. from Dartmouth, an M.Sc. from the London School of Economics and Political Science, and his Ph.D. from The University of Michigan. He teaches courses on European politics and the European Union.

He has written about the impact of trade openness on government and, with respect to the EU, the operation of the European Monetary System, the negotiation of the Treaty on European Union, Economic and Monetary Union, the eurozone crisis, the creation of democratic polities and market-oriented economies in central and eastern Europe, the crisis in Ukraine and, most recently, Brexit.  His publications include “The Expansion of the Public Economy: A Comparative Analysis,” American Political Science Review, 1978 (one of the ten most-cited APSR articles published between 1945 and 2005); Globalization and Self-Determination: Is the Nation-State under Siege? (Routledge, 2006), edited with Gustav Ranis and Annalisa Zinn; “Post-Communist Democracy: The Impact of the European Union,” Post-Soviet Affairs, Vol. 23, July-September 2007; “Creating Market Economies after Communism: The Impact of the European Union,” Post-Soviet Affairs, Vol. 25, January-March 2009; “Post-Soviet Authoritarianism: The Influence of Russia in Its “Near Abroad,” Post-Soviet Affairs, Vol.28, January-March 2012; and Canada in the World: Comparative Perspectives on the Canadian Constitution (Cambridge University Press, 2018), edited with Richard Albert.

Globalization and Self-Determination: Is the Nation State under Siege.

Canada in the World: Comparative Perspectives on the Canadian Constitution