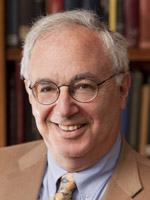 Bruce Ackerman is the author of nineteen books in political philosophy, constitutional law, and public policy. He is a Commander of the French Order of Merit, a member of the American Law Institute and the American Academy of Arts and Sciences. The American Philosophical Society has awarded him the Henry Phillips Prize for lifetime achievement in Jurisprudence, especially noting his exploration of the great turning points in American constitutional history in his three volume series, We the People. His award-winning early work, Social Justice in the Liberal State, continues to provoke contemporary controversy.

His scholarship has had a global impact. He has been named a Leading Global Thinker by Foreign Policy magazine, and has been awarded an Honorary Doctorate from the University of Trieste, Italy, for his contributions to comparative constitutional law. Before the Next Attack (2006) served as a basis for the reform of the French constitution dealing with emergency powers. The Stakeholder Society (with Anne Alstott) has served as the basis for reform initiatives in Brazil, Britain, and elsewhere that guarantee every person a fair share of the nation’s wealth by providing them with a “citizen stake” consisting of a substantial cash grant as they reach maturity.

His most recent book, Revolutionary Constitutions, puts the world-wide constitutional crisis in historical perspective by comparing the post-war experience of countries as different as France, India, Iran, Italy, Israel, Poland, South Africa, and the United States – and demonstrating that these nations have a good deal to learn from one another in confronting the current assault on checks-and-balances.

We the People, Volume 2: Transformations

Voting with Dollars: A New Paradigm for Campaign Finance

The Future of Liberal Revolution

The Failure of the Founding Fathers: Jefferson, Marshall, and the Rise of Presidential Democracy

The Civil Rights Revolution (We the People) (Volume 3)

The Case Against Lameduck Impeachment

Social Justice in the Liberal State

Revolutionary Constitutions: Charismatic Leadership and the Rule of Law

Private Property and the Constitution

Before the Next Attack: Preserving Civil Liberties in an Age of Terrorism