Stephen Herzog in Journal for Peace and Nuclear Disarmament 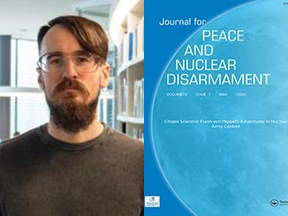 Graduate student Stephen Herzog has published an article in the Journal for Peace and Nuclear Disarmament entitled “The Nuclear Fuel Cycle and the Proliferation “Danger Zone””.

Abstract:
Horizontal nuclear proliferation presents what is sometimes referred to as the “Nth country problem,” or identifying which state could be next to acquire nuclear weapons. Nuclear fuel cycle technologies can contribute to both nuclear power generation and weapons development. Consequently, observers often view civilian nuclear programs with suspicion even as research on nuclear latency and the technological inputs of proliferation has added nuance to these discussions. To contribute to this debate, I put forth a simple theoretical proposition: En route to developing a civilian nuclear infrastructure and mastering the fuel cycle, states pass through a proliferation “danger zone.” States with fuel cycle capabilities below a certain threshold will likely be unable to proliferate. States that pass through the “danger zone” without proliferating will be unlikely to do so in the future. I support this proposition by introducing preliminary analysis from the Nuclear Fuel Cycle (NFC) Index, a new heuristic tool to complement political assessments of the connection between civilian nuclear energy development and nuclear weapons proliferation. I conclude with policy implications for contemporary Iran, Saudi Arabia, Japan, and South Korea. Taken together, this article calls for increased policymaker interaction with historical cases and more sophisticated academic engagement with the nuclear fuel cycle.