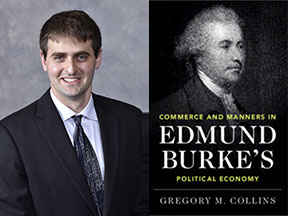 Gregory Collins’ new book on Edmund Burke’s economic thought, titled Commerce and Manners in Edmund Burke’s Political Economy, was recently released by Cambridge University Press (CUP) in the UK (and will be released in the states on June 25). The book is available for purchase now through the CUP website, and is being sold at a 20 percent discount through next March. (See the bottom of the attached promotional flyer for the book; order through CUP’s website and enter “COLLINS20” at checkout.) It is available on Amazon.com as well.

Although many of Burke’s speeches and writings contain prominent economic dimensions, his economic thought seldom receives the attention it warrants. Commerce and Manners stands as the most comprehensive study to date of this fascinating subject. In addition to providing rigorous textual analysis, Collins unearths previously unpublished manuscripts and employs empirical data to paint a rich historical and theoretical context for Burke’s economic beliefs. Collins integrates Burke’s reflections on trade, taxation, and revenue within his understanding of the limits of reason and his broader conception of empire. Such reflections demonstrate the ways that commerce, if properly managed, could be an instrument for both public prosperity and imperial prestige. More importantly, Commerce and Manners in Edmund Burke’s Political Economy raises timely ethical questions about capitalism and its limits. In Burke’s judgment, civilizations cannot endure on transactional exchange alone, and markets require ethical preconditions. There is a grace to life that cannot be bought.