Graduate Student Matthew Denney: ““To Wage a War”: Crime, Race, and State Making in the Age of FDR” 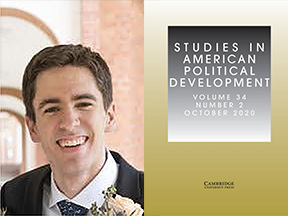 Graduate student Matthew Denney has published an article in Cambridge University Press Studies in American Political Development Journal entitled ““To Wage a War”: Crime, Race, and State Making in the Age of FDR.”

“The FDR administration waged a war on crime starting in 1933. I argue that this war on crime had three primary effects. First, it created a ratchet effect whereby expanded institutions did not return to previous levels after the campaign ended. Second, it instilled enduring institutional and racial logics into law enforcement in America. By building a state through a war on crime, these leaders constructed a criminal justice system designed to make war. Moreover, they perpetuated the surveillance of Black leaders and eschewed calls from Black organizations demanding protection from widespread racial violence. Third, these political entrepreneurs induced an issue realignment that defined crime policy around a politics of consensus—a consensus that included every major political bloc but Black Americans, who unsuccesfully called on the federal government to hold local police accountable and address racial inequality. This coalition diffused their methods to states and deployed future wars on crime, and the racial logics cemented in the FDR era set the stage for these future wars to be deployed disproportionately against the Black community.”