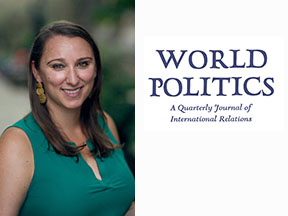 In a new article published in World Politics, Assistant Professor Elizabeth Nugent asks: how does political polarization occur under repressive conditions? Drawing on psychological theories of social identity, she argues that the nature of repression drives polarization. Repression alters group identities, changing the perceived distance between groups and ultimately shaping the level of affective and preference polarization between them through differentiation processes. The author tests the proposed causal relationship using mixed-method data and analysis. The results of a laboratory experiment reveal that exposure to a targeted repression prime results in greater in-group identification and polarization between groups, whereas exposure to a widespread prime results in decreased levels of these same measurements. The effect of the primes appears to be mediated through group identification. Case-study evidence of polarization between political opposition groups that were differently repressed in Egypt and Tunisia reinforces these results. The findings have implications for understanding how polarization, as conditioned by repression, may alter the likelihood of the cooperative behavior among opposition actors necessary for the success of democratic politics.

You can find the article here.