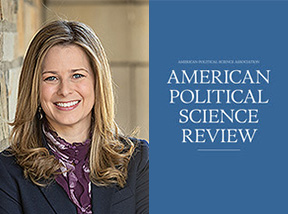 Assistant Professor Christina Kinane has a new article in the American Political Science Review entitled “Control without Confirmation: The Politics of Vacancies in Presidential Appointments.”

“Scholarship on separation of powers assumes executives are constrained by legislative approval when placing agents in top policy-making positions. But presidents frequently fill vacancies in agency leadership with unconfirmed, temporary officials or leave them empty entirely. I develop a novel dataset of vacancies across 15 executive departments from 1977 to 2016 and reevaluate the conventional perspective that appointment power operates only through formal channels. I argue that presidents’ nomination strategies include leaving positions empty and making interim appointments, and this choice reflects presidents’ priorities and the character of vacant positions. The evidence indicates that interim appointees are more likely when positions have a substantial capacity to act on presidential expansion priorities and suggest that presidents can capitalize on their first-mover advantage to evade Senate confirmation. The results further suggest that separation of powers models may need to consider how deliberate inaction and sidestepping of formal powers influence political control and policy-making strategies.”