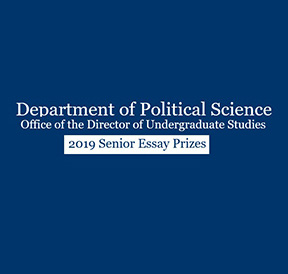 Each year the Department awards prizes to the graduating seniors who have written the best senior essay in the fields of American Politics, the U.S. Constitution and its first ten amendments, Comparative Politics, International Relations, and Political Philosophy.

A total of 138 seniors wrote essays this year. Many were outstanding and were nominated for prizes. The Senior Essay Prize Committee have asked us to single out the following students and essays for special distinction:

We would also like to recognize Sanoja Bhaumik, co-winner of this year’s Richard Hegel Senior Essay Prize, for her essay “Choice is Being Able to Choose: Examining Voluntary Desegregation through Interdistrict School Choice in New Haven Public Schools” (advisor Cynthia Horan).