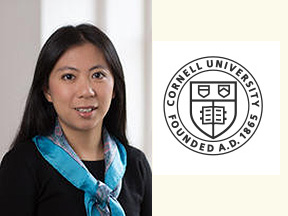 ITHACA, NY - Six of the world’s most promising early-career scholars – including Yale’s Baobao Zhang – are recipients of the inaugural Klarman Postdoctoral Fellowships in Cornell University’s College of Arts & Sciences.

During three-year terms beginning this summer and fall, the Klarman Fellows will pursue leading-edge research projects across the sciences, social sciences and humanities, each working with an A&S faculty mentor. Their research topics range from the governance of artificial intelligence and interpreting gravitational waves produced by merging black holes, to meritocracy in Silicon Valley and logic studies linking analytic philosophy with mathematics.

“We were deeply impressed with the caliber of applicants in this first round, and we are thrilled to welcome six extraordinary scholars to advance their research at Cornell,” said Ray Jayawardhana, the Harold Tanner Dean of Arts and Sciences, who led the program’s conception and launch. “Their work is not only significant in fundamental ways but also highly relevant and topical to our time. Our commitment to curiosity-driven research and radical collaboration makes Arts & Sciences the perfect home for the Klarman Fellows, and I look forward to the discoveries and impacts that will emerge in the years to come.”

Applications for this premier postdoctoral program closed in October, attracting more than 260 candidates, far exceeding expectations for the inaugural year.

“The Klarman Fellowships are tailored to give the most talented young researchers the greatest possible scope for creativity and achievement, while enriching Cornell’s environment of exploration and discovery,” said Cornell President Martha E. Pollack. “I am delighted to welcome these exceptional scholars into the Cornell community, where they will have the fullest opportunities to pursue their groundbreaking work.”

The first cohort of Klarman Fellows at Cornell are:

Each of the inaugural Fellows has already made significant contributions to their field, Jayawardhana noted, setting a high standard for future Klarman cohorts. “I am struck by their intellectual ambition, methodological sophistication and sense of purpose,” he added.

Already among the most competitive postdoctoral programs in the country, the Klarman Fellowships encourage recipients to concentrate full time on their research unencumbered by specific outcome requirements or teaching assignments. The Fellowships confer generous salaries, benefits and research support, in addition to opportunities for professional development and enrichment. Klarman Fellows will meet every month during the academic year and participate in an annual symposium.

“I applaud Seth and Beth Klarman for their visionary support of research that is unique, essential and urgent,” Pollack said. “I am confident that in the coming years the Klarman Fellowships will continue to attract the world’s most promising young scholars, strengthening Cornell’s academic distinction while channeling immense talent and curiosity into emerging and vital areas of inquiry.”