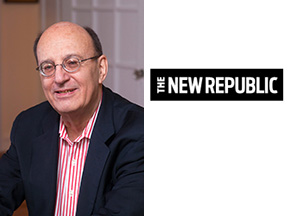 The New Republic today announced its expanded editorial team under the direction of recently-named Editor Chris Lehmann. Walter Shapiro brings a varied background and years of in-depth reporting experience to The New Republic, and is joining as a part-time staff writer, effective immediately.

Shapiro, a legendary political journalist, will focus on the 2020 presidential campaign.  Shapiro has been a frequent contributor to the magazine since 1980. He is the author of two books; a veteran of such publications as USA Today (where he was a long-time political columnist), Time, and Newsweek; and a White House speechwriter for Jimmy Carter. In addition to his new staff position, Shapiro will continue as a lecturer in political science at Yale (since 2013) and as a fellow at the Brennan Center for Justice at New York University (since 2014). He will also maintain his weekly column for Roll Call.