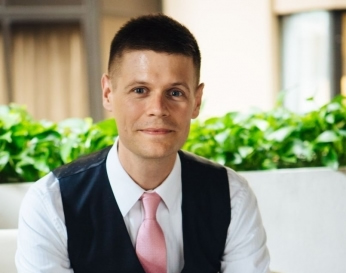 Thanks to funding from the Japan Foundation Center for Global Partnership and the MacMillan Center, Nick Anderson, a Ph.D. candidate in the Department of Political Science, has been conducting research on the political relations among Japan’s medieval samurai warlords for the past two academic years. In the following article, he shares some of his work with the MacMillan Center.

Why is modern Japan one country rather than multiple countries? Why, after nearly 140 years of relentless warfare, during its “Warring-States Period,” did the country eventually unify under the stable hierarchy of the Tokugawa Shogunate? Was world politics in medieval and early modern East Asia fundamentally similar to our modern international system, or was it fundamentally different? And how are we to understand the transformation of systems in world history? How do we account for the change from a system composed of a certain type of political unit, such as warlords’ domains, to a system composed of an entirely different type, such as a unified and centralized state? These are some of the questions I have had in the forefront of my mind as I’ve conducted research on Japan’s Warring-States Period (1467-1600), generously funded by the Japan Foundation CGP and the MacMillan Center. 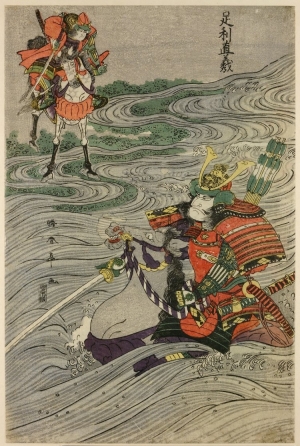 Ashikaga Tadayoshi fording the river at Kawanaka-jima, between circa 1770 and circa 1820.

While this period of Japanese history is very well covered in the qualitative and historical literature—particularly by some of Yale University’s own past greats like John Whitney Hall—this is a historical context that has scarcely been considered from the perspective of my own discipline, international relations. However, given that Japan was deeply politically fragmented during these years, with the country being divided up between autonomous warlords and their territorial domains, it occurred to me that it wasn’t all that different from the modern international system—which itself is divided up among autonomous, independent territorial states. Thus, I figured that approaching Warring-States Japan from the perspective of international relations theory may shed new light on this incredibly important period of world history.

In order to do so, I began—with the help of a tireless research assistant, the guidance of Haruko Nakamura at Sterling Memorial Library, and the support of the Japan Foundation CGP and the MacMillan Center—to collect data from the most authoritative and comprehensive chronology of this period of Japanese history. Thus far, I’ve collected information on a wide variety of political phenomena, including battles and wars between warlords; their alliances and alignments; peacemaking and reconciliation; territorial conquest; peasant rebellion; ritualistic gift-giving; political marriages, adoptions, and the exchange of hostages; and diplomacy with actors outside the Japanese archipelago, such as China and Korea. While I am still at the fairly early stages of what will ultimately be a multi-year and multi-phase project, I’ve managed to put together some interesting preliminary collections of information, such as which warlords engaged in battle most frequently and which attacked others most often (see figure below).

The data collection phase of the project will likely be complete by the end of this summer, and I next plan to move onto some interesting applications, such as looking at how the archipelago was eventually unified by Toyotomi Hideyoshi, the fluctuations in the number and types of independent political units over time, and, with colleagues in the Department of Sociology, the social and political networks of these samurai warlords. Beyond my own applications, once the data is publicly available it should be of interest to scholars of Japanese history, early modern East Asia, and systemic international relations theory. Furthermore, since no quantitative data of this sort currently exist, my hope is that this project will open up this fascinating period of world history to scholars from a variety of fields, from military history, to international relations, to comparative politics, and beyond.

(Taken from Japan at the Crossroads: Yale Project on Japan’s Politics and Diplomacy)