Seeing like a State by James Scott wins its second and third APSA prizes. 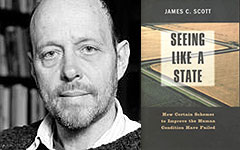 James Scott has been awarded two APSA prizes this year for his 1999 book Seeing Like A State.

The 2015 Aaron Wildavsky Award, given by the Public Policy section of the American Political Science Association to a book that has made an enduring contribution to the field of public policy.

The  2015 Benjamin E. Lippincott Award, which is awarded biennially to recognize a work of exceptional quality by a living political theorist that is still considered significant after a time span of at least 15 years since the original date of publication.

These are the second and third prizes Jim’s book has been awarded.  The first, the 2000 Mattei Dogan Award, is presented to either a scholar with an ensemble of outstanding scientific publications and constructive professional achievements or a coherent team of several researchers enjoying a high reputation in the international community of political sociologists.

You can find a description of his publication here.