Professor John Roemer’s ‘How We Cooperate’ is now available. 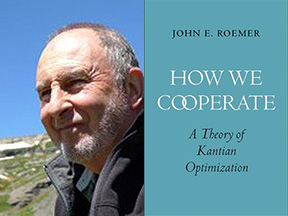 Professor John Roemer’s newest book, How We Cooperate, is now out at Yale Publishing.

A new theory of how and why we cooperate, drawing from economics, political theory, and philosophy to challenge the conventional wisdom of game theory.

Game theory explains competitive behavior by working from the premise that people are self-interested. People don’t just compete, however; they also cooperate. John Roemer argues that attempts by orthodox game theorists to account for cooperation leave much to be desired. Unlike competing players, cooperating players take those actions that they would like others to take—which Roemer calls “Kantian optimization.” Through rigorous reasoning and modeling, Roemer demonstrates a simpler theory of cooperative behavior than the standard model provides.

John E. Roemer is the Elizabeth S. and A. Varick Stout Professor of Political Science and Economics at Yale University. He is the author of several books, including Sustainability for a Warmer Planet; Democracy, Education, and Equality;Political Competition: Theory and Applications; and Equality of Opportunity.