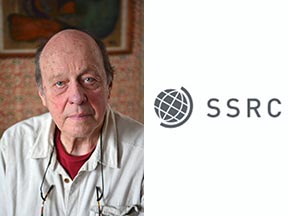 The Social Science Research Council (SSRC) is proud to announce that James C. Scott is the recipient of the 2020 Albert O. Hirschman Prize, the Council’s highest honor.

The biennial Hirschman Prize is awarded to scholars who have made outstanding contributions to international, interdisciplinary social science research, theory, and public communication.

The nominating committee for this year’s prize, composed of SSRC Board member Naomi Lamoreaux of Yale University, SSRC Board member Walter Powell of Stanford University, and William Milberg of the New School for Social Research, cited Scott as “the epitome of a broad-ranging scholar with influence across a multitude of disciplines.” The committee noted that a “gentle, humanistic approach toward policy runs through Scott’s enormously influential oeuvre, making him a fitting candidate for this prize.”

“Creative, forthright and discipline-defying research is a hallmark of James Scott’s scholarly metis,” said SSRC president Alondra Nelson. “Across a remarkable career, he has generated a body of work of extraordinary range and depth, while continuously limning the contours of power and freedom from the standpoint of the lived experience of oppressed and marginalized communities. The Council is therefore very pleased to honor Professor Scott with the 2020 Hirschman Prize.”

Professor Scott will present the Albert O. Hirschman Lecture at an award ceremony to be held in New York City on December 4, 2020.