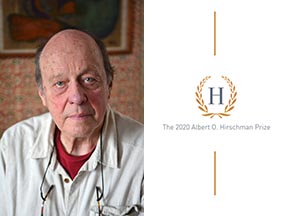 “In Praise of Floods”

About the Albert O. Hirschman Prize:

Awarded every two years, the Hirschman Prize is the highest honor of the Social Science Research Council. It recognizes excellence in research, theory, and public communication, in the tradition of German-born American economist and Institute for Advanced Study professor Albert O. Hirschman’s pioneering role in social science and public policy. Exploring theory and practice, the history of ideas—economic, social, or political—and innovative approaches to fostering growth, Hirschman saw scholarship both as a tool for social change and as an inherent value in a world in need of better understanding. He wrote in ways that help social science effectively inform public affairs. His work stands as an exemplar of the necessary knowledge that the Council seeks to develop and the interdisciplinary and international approach that it champions.”