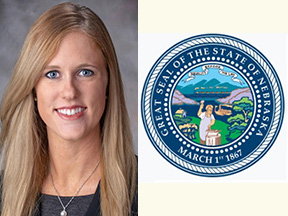 Senator Julie Slama (R), class of 2018, has been named to the Forbes “30 under 30” a collection of young citizens that are expected to help shape the next decade of law, public policy and entrepreneurial endeavors.  Senator Slama is citied for her work in Law and Policy.

Senator Slama was also named the nation’s Young Republican Legislator of the Year at the 2019 Young Republican National Federation Convention.  She has fought for flood relief for the worst disaster in Nebraska’s history, led the way on legislation to stop human trafficking and worked to improve Nebraska Civics Education.

Senator Slama graduated from the Political Science program with an emphasis on International relations in 2018.  She was appointed to the Nebraska Legislature in 2018 and is a candidate for a four year term in 2020.