Keith E. Whittington, ‘95, named to the Presidential Commission on the Supreme Court of the United States. 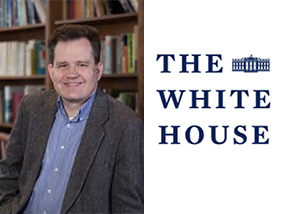 Keith E. Whittington, 1995 Yale University Political Science graduate with distinction, has been named to the Presidential Commission on the Supreme Court of the United States.

Professor Whittington is the William Nelson Cromwell Professor of Politics at Princeton University and is currently the chair of Academic Freedom Alliance. He works on American constitutional history, politics and law, and on American political thought. He is the author of Repugnant Laws: Judicial Review of Acts of Congress from the Founding to the Present and Political Foundations of Judicial Supremacy: The Presidency, the Supreme Court, and Constitutional Leadership in U.S. History, among other works. He has been a visiting professor at Harvard Law School, Georgetown University Law Center, and the University of Texas School of Law, and he is a member of the American Academy of Arts and Sciences. He did his undergraduate work at the University of Texas at Austin and completed his Ph.D. in political science at Yale University.