John Roemer’s new book, “Sustainability for a Warming Planet”, has been awarded the X Prize of the Catalan Society of Economics. 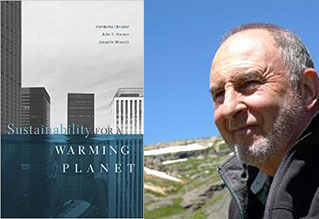 John Roemer, together with his co-authors, Humberto Llavador and J. Silvestre, were awarded the X Prize of the Catalan Society of Economics for their book Sustainabiiity for a Warming Planet. This is a biennial prize awarded to the best book in economics authored by a researcher working in ‘territories of Catalan culture.

The Jury of the X Prize, consisting Eduard Ride and Valeri (Chairman), Enrique Fernández Martínez, Jordi Gali and Shank, Guillem López Casasnovas Angel Weight and plaster Tugores and Ques and Antoni Montserrat i Solé (acting as Secretary ) met in Barcelona on 13 December 2016 and decided to award it to “Sustainability for a warming planet,” published by Harvard University Press.

The winning work contains important contributions to scientific and methodological analysis of the sustainability and long-term is a central theme in the concerns of economists and ecologists. This work is rigorous and documented.