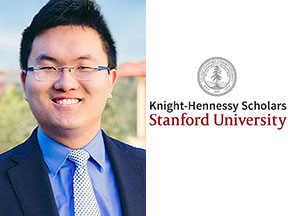 Graduating senior David Jiang is among 70 students from around the world who have been named Knight-Hennessy Scholars at Stanford University.

David Jiang, who majored in global affairs and political science at Yale, seeks to make healthcare more accessible and affordable by reforming regulation, insurance, and care delivery. He is a published health policy academic at Mayo Clinic, where his research interests range from long COVID to medical AI device regulation. His work has appeared in the Journal of the American College of Cardiologists, the Journal of General Internal Medicine, and the BMJ Open. Jiang is an adviser for the Minnesota Department of Health and was appointed by Minnesota Governor Tim Walz to serve on the state’s Board of Nursing. He co-founded Oraculi, a nonprofit science education and mentorship program for underserved communities in Minnesota. He is from Rochester, Minnesota.