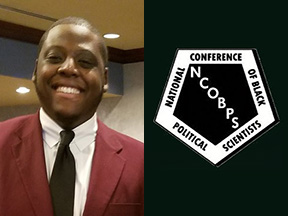 Graduate Student Da’Von Boyd has been chosen as the recipient of the 2021 Alex Willingham Best Political Theory Paper Award.

Taking an approach that attends both the Afro-Christian and secular underpinnings of Dr. Martin Luther King, Jr.’s political philosophy, Da’Von Boyd shows how King’s moral argument is able “to capture the different sensibilities of his new allies who are equally concerned with the intersecting political difficulties that face the nation and the world [militarism, capitalism, and racism]; yet did not have the same spiritual strivings.” Boyd’s deeply historical approach situates King’s thought and activism within the Black radical tradition.

Because of this honor, he was invited to attend and be acknowledge for his award during the 2021 Virtual Meeting of the National Conference of Black Political Scientists (NCOBPS).