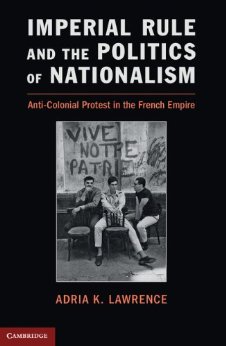 Adria Lawrence has just been awarded the 2015 J. David Greenstone Book Prize of the Politics and History section of APSA for her book “Imperial Rule and the Politics of Nationalism.”

The purpose of the Politics and History Section of the American Political Science Association is to bring together political scientists interested in historical issues and problems drawing from almost every traditional disciplinary subfield.

The J. David Greenstone Book Prize recognizes the best book in history and politics in the past two calendar years.  The first J. David Greenstone Award was given in 1993.  Authors arrange to have their books sent to each member of the committee, and only books published in 2013 and 2014 were considered this year.