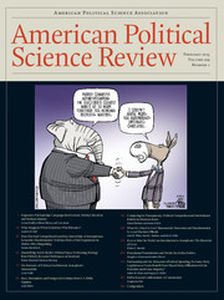 “Partisanship and the Allocation of Federal Spending: Do Same-Party Legislators or Voters Benefit from Shared Party Affiliation with the President and House Majority?”

Abstract: Previous research finds that House majority members and members in the president’s party garner additional federal spending in their districts. Using federal spending data in individual districts, we implement two research designs to distinguish elected officials enacting policies that benefit like-minded voters—the party in the electorate—from those that benefit same-party elected officials—the party in government. We find robust evidence that presidential partisanship is associated with large differences in spending correlated with voter preferences, but little evidence that presidents favor areas represented by their party in the House. By contrast, control of the House is associated with differences in spending by voter preferences and with modest increases in spending in districts held by members of the majority. These findings have important implications for understanding presidential influence, as well as the role of parties in the House and in coordinating between elected branches.