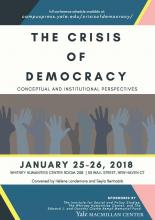 “The Crisis of Democracy: Conceptual and Institutional Perspectives.”

Everywhere today, representative democracy is on the defensive. In the Western world, the recent U.S. presidential election and the result of the Brexit referendum are only the most striking illustrations of a larger phenomenon. Across the West, there is widespread backlash against what people have come to see as a rigged game controlled by elites, which has, in turn, triggered new waves of populism. Democracy is on the defensive beyond the Western world, as well. Soon after the failure of democratic nation-building attempts in Iraq, some observers diagnosed a global democratic recession. Meanwhile, at the level of ideas, some are emboldened to reject the ideal of democracy as popular control or even democracy itself. Others tout China and Singapore—so-called “meritocratic” or “technocratic” systems—as the new path forward. As the century of Chinese superpower unfolds, democracy, both as a set of institutions and as a normative ideal, appears to be losing ground. This conference aims to bring a number of conceptual and institutional perspectives to bear on this widely diagnosed crisis of democracy and to consider possible solutions.

Please join us for panels on the following topics:

2:00 to 2:15 pm: Welcome remarks by Seyla Benhabib and Hélène Landemore

2:00 to 3:30 pm: Fourth Panel: Negotiating the Boundaries of the Demos

4:00 to 5:30 pm: Fifth and final panel: Rethinking Democracy in the Global Age

This conference is hosted by Professors Hélène Landemore and Seyla Benhabib. Please visit the conference website here. Both days are open to the public. The event is generously funded by the Edward J. and Dorothy Clarke Kempf Memorial Fund, the Institute for Social and Policy Studies and the Whitney Humanities Center.