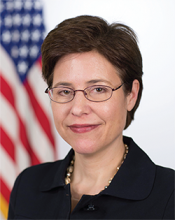 Melissa Rogers served as Obama administration special assistant to the president and executive director of the White House Office of Faith-based and Neighborhood Partnerships. Rogers previously served as chair of the inaugural Advisory Council on Faith-based and Neighborhood Partnerships, Executive Director of the Pew Forum on Religion and Public Life, and General Counsel of the Baptist Joint Committee for Religious Liberty. Her areas of expertise include the First Amendment’s religion clauses, religion in American public life, and the interplay of religion, policy, and politics. Rogers co-authored a case book on religion and law for Baylor University Press, Religious Freedom and the Supreme Court (2008). She holds a J.D. from the University of Pennsylvania Law School and a B.A. from Baylor University.

In her lecture, Rogers will consider some ways in which Justice Kennedy’s voice and vote mattered in religious freedom cases, and how a Justice Kavanaugh might change that calculus.

The White House has described the Kavanaugh appointment as part of President Trump’s efforts to “reshap[e] the judiciary,” work that “goes hand-in-hand” with the President’s program to “promot[e] individual liberties and religious freedoms.”

The Loring Sabin Ensign Lectureship in Contemporary Interpretation of Religious Issues was founded in 1994 by church members and other friends to honor Loring S. Ensign ’51 M.Div. for his quarter-century of service as pastor of the Southport, Conn., Congregational Church.

The Ensign Lecture is open to the Yale and New Haven area communities and will be livestreamed at https://livestream.com/yaledivinityschool.

Parking is available in the Yale Divinity School lot.