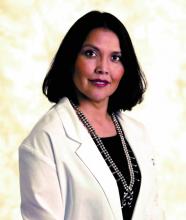 On Monday, September 17, 2018, Patricia Nez Henderson ’94 M.P.H., ’00 M.D. will join President Peter Salovey in a conversation open to members of the Yale community. In anticipation of 2019, which will mark the fiftieth anniversary of Yale undergraduate coeducation and more than 150 years of women’s academic affiliation in Yale’s graduate and professional schools, the President’s Women of Yale Lecture Series celebrates outstanding Yale alumnae.

Dr. Henderson is the vice president of the Black Hills Center for American Indian Health, a nonprofit organization dedicated to addressing the health needs of Northern Plains tribes. Her research and advocacy focus on tobacco control and prevention programs among American Indian populations. Increasing rates of tobacco use among Native Americans contribute to cardiovascular disease and lung cancer, the leading causes of death among American Indians and Alaska Natives. Working closely with tribal communities, Dr. Henderson develops culturally informed research and intervention programs to reduce tobacco use and promote health.

A member of the Dine’ (Navajo) tribe, Dr. Henderson grew up in rural Arizona and earned a B.S. in biochemistry from the University of Arizona. The first Native American woman to graduate from the Yale School of Medicine, she is the recipient of many awards and honors, including the 2017 Ely S. Parker Award from the American Indian Science and Engineering Society.

Please bring your ticket for entry. The session will be recorded and posted on the Yale YouTube channel.

Admission:
Free but register in advance
Open to:
Yale Community Only