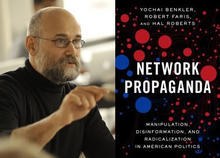 On Thursday, February 21st from noon to 1:30 p.m., the Policy Lab will be hosting a lunch talk with Yochai Benkler, a Professor at Harvard Law School, on his new book, Network Propaganda: Manipulation, Disinformation, and Radicalization in American Politics. “Networked Propaganda” combines data analysis and case studies to examine the right-wing media ecosystem and its role in polarization, the election of Donald Trump, and the rise of the current “post-truth” era. Analyzing millions of news stories together with Twitter and Facebook shares, broadcast television, and Youtube, Yochai’s book offers the most detailed analysis yet of contemporary American political communications.

Yochai Benkler is the Berkman Professor of Entrepreneurial Legal Studies at Harvard Law School, and faculty co-director of the Berkman Klein Center for Internet and Society at Harvard University. Since the 1990s he has played a role in characterizing the role of information commons and decentralized collaboration to innovation, information production, and freedom in the networked economy and society. His books include The Wealth of Networks: How social production transforms markets and freedom (Yale University Press 2006), which won academic awards from the American Political Science Association, the American Sociological Association, and the McGannon award for social and ethical relevance in communications. In 2012 he received a lifetime achievement award from Oxford University in recognition of his contribution to the study and public understanding of the Internet and information goods. His work is socially engaged, winning him the Ford Foundation Visionaries Award in 2011, the Electronic Frontier Foundation’s Pioneer Award for 2007, and the Public Knowledge IP3 Award in 2006. It is also anchored in the realities of markets, cited as “perhaps the best work yet about the fast moving, enthusiast-driven Internet” by the Financial Times and named best business book about the future in 2006 by Strategy and Business. Benkler has advised governments and international organizations on innovation policy and telecommunications, and serves on the boards or advisory boards of several nonprofits engaged in working towards an open society. His work can be freely accessed at http://www.benkler.org.

This event is open to the public, and lunch will be served. If you are interested in attending, please RSVP at the link provided.