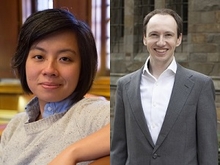 The workshop will be hosting dual mini-talks presented by Yale graduate students. Jennifer Wu is a PhD candidate in the Department of Political Science. Her research is concerned with Asian political behavior in American politics, with a particular focus on studying the role the pan-Asian identity plays in explaining variation in preferences and behaviors of Asians in the US. Paul Lendway is a PhD student in Political Science specializing in American political behavior.

Abstract: This study aims to understand how perceptions of Asian-ness – specifically, whether some national origin groups are perceived as being “more” or “less” Asian – influences subsequent perceptions and preferences around the descriptive representativeness of Asian politicians. In particular, I focus on Kamala Harris, whose recent nomination and election to Vice President generated news coverage highlighting her multiple racial identities and emphasized the role of her Asian identity in promoting Asian turnout. To do identify the role of how perceptions of who is considered Asian affects the ability of racial- and ethnic-based appeals to promote turnout, I rely on a series of survey experiments which are organized to answer the following questions. First, I measure the perceived “Asian-ness” of different Asian national origin groups and Asian politicians. Second, I measure whether Kamala Harris is perceived as more or less Asian depending on how her racial identity is primed in campaign appeals. Finally, I measure beliefs around Harris’s ability to represent the Asian community and her favorability to test whether increasing her perceived Asian-ness also increases her perceived representability of Asian Americans. For robustness, I also include other Asian politicians who vary in their national origin background.

Paul Lendway: “The Effect of Populist Rhetoric on Public Attitudes”

Abstract: Recent research has experimentally identified that populist rhetoric can induce changes ranging from affect to policy preferences. Scholars have also made theoretical claims about populism’s effects, such as the argument that it can diminish liberal democracy and even lead to authoritarianism. Less explored is how populism operates. This paper fills that gap by proposing the moral reclassification theory (MRT) of populism. Consistent with prior research, MRT assumes that populism operates as a process that concurrently delegitimizes the populist’s targeted out-group while legitimizing the populist, the populist’s followers, and their will. By framing the delegitimized out-group as acting in violation of social norms and values, MRT proposes that populist attacks serve as a moral justification for the in-group to also violate values and norms in order to rectify the out-group’s transgressions. MRT departs from previous work on populism in that it is a more general theoretical framework that allows for more populist end states than a reduction of liberal democracy or authoritarianism. A national survey experiment tests and provides compelling evidence for MRT.