Lecture, Wearing Your Heart on Your Sleeve: Jewelry as Cultural Marker 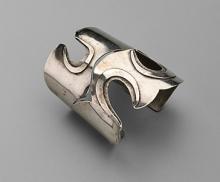 Common to all eras and societies, jewelry plays a major role in revealing one’s identity. In this lecture, art historian Toni Wolf Greenbaum discusses jewelry as a telling device that defines style, status, and sentiment, while at the same time proclaiming membership, conviction, and even alienation. Greenbaum examines this universal artifact within the broader context of history, tradition, ethnography, popular culture, political discourse, and contemporary aesthetics.

Toni Wolf Greenbaum is a New York–based art historian specializing in 20th- and 21st-century jewelry and metalwork. She is the author of Messengers of Modernism: American Studio Jewelry 1940–1960 and has written numerous book chapters, exhibition catalogues, and essays. She is currently writing a monograph on the modernist jeweler Sam Kramer. Greenbaum has lectured internationally at institutions such as the Pinakothek der Moderne, Munich; the Academy of Arts, Architecture and Design, Prague; the Museum of Arts and Design and the Cooper-Hewitt, Smithsonian Design Museum, New York; and the Museum of Fine Arts, Boston. She has curated exhibitions for several museums, including the Victoria and Albert Museum in London. Greenbaum is a professor at Pratt Institute in Brooklyn, where she lectures on theory and criticism of contemporary jewelry.