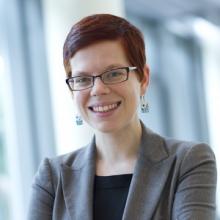 Abstract: Contact with the criminal justice system has been shown to reduce individuals’ political participation, but its effect on friends and family members is less clear. Do people who see loved ones arrested or incarcerated become mobilized to change the system, or do they withdraw from political life? I address this question using administrative data from one large county, identifying registered voters who live with someone facing misdemeanor charges. Court records and vote histories allow me to accurately measure proximate criminal justice exposure and voting for a broader sample of people than survey data would. Using case timing for arrests shortly before and shortly after the election allows me to avoid bias from omitted variables. I find evidence of a short-term demobilization effect for people who see household members convicted or jailed in the weeks before the election, but no evidence of a lasting turnout effect from these experiences.

Ariel White is an Assistant Professor of Political Science at MIT. She studies voting and voting rights, media, race, and the criminal justice system. Her work uses large datasets to measure individual-level experiences, and to shed light on people’s everyday interactions with government. She received her PhD in Government from Harvard University, where she was a doctoral fellow in the Multidisciplinary Program in Inequality and Social Policy and a Radcliffe fellow. Her research has appeared in the American Political Science Review, Science, and elsewhere.