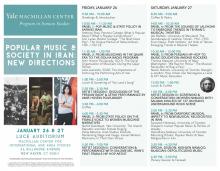 The political and sociological study of music in contemporary Iran is a growing field, and this conference is the first of its kind to bring together researchers and academics working on the topic. During a two-day symposium, researchers from the North America region will present on topics that are as varied as the study of Safavid and Qajar musical traditions (16th to 19th centuries) and their direct implications for practices in the Pahlavi period and up to the Islamic Republic, the issue of women musicians following the revolution, emerging trends in musical theater, the politics of impiety in expatriate music productions, and the intersection of religious rituals and pop music. This conference also aims to incorporate perspectives from musicians, recognizing the importance of including their voices in academic research on the subject. As such, there will be three artist panels, where the musicians will first appear on an interview-style panel, and subsequently perform a few pieces. All presentations are united in their quest to take music as a serious register for the political and sociological study of contemporary Iran.
Sponsor: Sponsored by The Iranian Studies Program at Yale, Yale Institute of Sacred Music, and the Council of Middle East Studies at the Whitney and Betty MacMillan Center for International and Area Studies at Yale, with generous support from the US Department of Education’s Title VI National Resource Center Grants