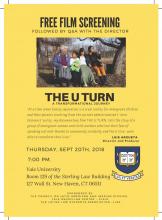 “The U-Turn - A Transformational Journey.”

A discussion with Luis Argueta, Director and Producer of the film will follow.

“At a time when family separation is a cruel reality for immigrant children and their parents resulting from the current administration’s “zero-tolerance” policy, my documentary film THE U-TURN tells the story of a group of immigrant women and child-workers who lost their fear of speaking out and–thanks to community solidarity and the U Visa-were able to transform their lives.” –Luis Argueta, Director and Producer