CMES Colloquium: Pain as Epistemology: Ali Shari‘ati and the Poetics of Politics 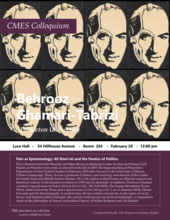 Prof. Ghamari joined the Sharmin and Bijan Mossavar-Rahmani Center for Iran and Persian Gulf Studies at Princeton University as director in the fall of 2019. He began teaching at Princeton’s Department of Near Eastern Studies in February 2019 after 14 years at the University of Illinois, Urbana-Champaign. There, he was a professor of history and sociology and director of the Center for South Asian and Middle Eastern Studies. He is the author of three books on different aspects and historical contexts of the Iranian revolution of 1979 and its aftermath. In addition, Professor Ghamari coedited a special issue of Radical History Review (No. 105, Fall 2009), The Iranian Revolution Turns Thirty, Duke University Press; and a special issue of Iran-Nāmag (vol. 3, no. 2, Summer 2018), Michel Foucault and the historiography of modern Iran. He has written extensively on the topics of social theory and Islamist political thought. His current work focuses on mystical modernity, a comparative study of the philosophy of history and political theory of Walter Benjamin and Ali Shariati.