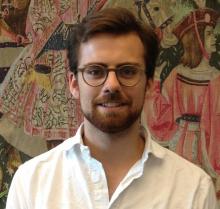 Maximilian Krahé is a doctoral candidate in political theory at Yale. His dissertation offers a normative analysis of contemporary American capitalism, with a focus on the relationships between capitalism and justice, the virtues, and democracy. His other research interests include analytical Marxism, the methodology of political theory, and comparative political economy. Before coming to Yale, Maximilian worked for an economic consultancy in London, specialising in energy and climate change economics.