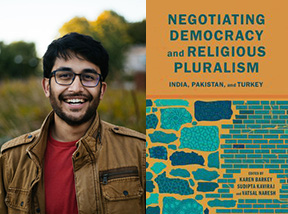 “Negotiating Democracy and Religious Pluralism examines the relationship between the functioning of democracy and the prior existence of religious plurality in three societies outside the West: India, Pakistan, and Turkey. All three societies had on one hand deep religious diversity and on the other long histories as imperial states that responded to religious diversity through their specific pre-modern imperial institutions. Each country has followed a unique historical trajectory with regard to crafting democratic institutions to deal with such extreme diversity. The volume focuses on three core themes: historical trends before the modern state’s emergence that had lasting effects; the genealogies of both the state and religion in politics and law; and the problem of violence toward and domination over religious out-groups. Volume editors Karen Barkey, Sudipta Kaviarj, and Vatsal Naresh have gathered a group of leading scholars across political science, sociology, history, and law to examine this multifaceted topic. Together, they illuminate various trajectories of political thought, state policy, and the exercise of social power during and following a transition to democracy. Just as importantly, they ask us to reflexively examine the political categories and models that shape our understanding of what has unfolded in South Asia and Turkey.”