Mother Courage and Her Children: A Senior Project in Theater Studies for Erin Krebs 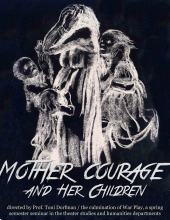 Bertolt Brecht’s collaboration with Margarete Steffin, MOTHER COURAGE AND HER CHILDREN (1939), is often considered one of the greatest anti-war plays ever written. Originally written as one of nine plays in support of the resistance against Nazism and fascism, this piece follows a shrewd canteen woman named Anna Fierling, Mother Courage herself, and her blind determination to profit off of war through trading and scheming. Collaboration on this production will provide a unique opportunity for Yale undergraduate artists to explore theatrical genres less commonly performed on our campus including “Epic Theatre”, the “play with music”, and non-English originating/ translated foreign texts.

Our MOTHER COURAGE will be the culmination of a new production seminar, THST 438b/ HUMS 181b: War Plays. As the script has it, we’ll set the play in 17th-century Europe during 18 years in the Thirty Years War. It will be directed by Professor Toni Dorfman.

In life the pathos of war, the horror of war, its death and ruin are as close to hell as we can imagine. In theater, the depiction of war is shaped into something that seems to mean.

But what does that mean? Is it the sheer vitality of live actors connecting with live audiences? How do irony, spectacle, comedy, poetry, and music interweave with, intensify, and undercut pathos to hold the audience? And we’ll consider another another question central to Brecht’s theory and practice: What is political theater, and how does it – or doesn’t it – work?