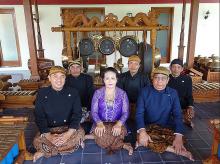 The Council on Southeast Asian Studies, the Department of Music and the Yale Institute of Sacred Music present a Javanese Gamelan Klenèngan Concert.

This concert will be a traditional Javaneseklenèngan performance with a relaxed atmosphere.  Ngudi Raras will play klenèngan bébas, a performance with no preparation as to which pieces will be played or how they will be interpreted.  A leading musician spontaneously decides on what piece to play, and the rest of the members follow the lead.  To do this, the musicians must have the entire repertoire internalized, know each instrument’s part and how they relate, and listen for subtle musical cues as the piece unfolds in performance. The musicians in the tour come from Solo, one of the court cities of Central Java. Some of teach at the national conservatory of Indonesia in Surakarta, and some are court musicians at Mangkunegaran court.