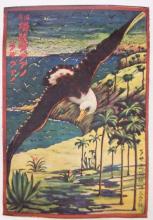 In the first half of the twentieth century a number of Japanese companies began investing in offshore guano mining. Beginning in the North Pacific, in the interwar period guano prospectors fanned out across the South China Sea, surveying and claiming uninhabited islands that they hoped would prove commercially valuable. To defend their claims they cultivated close connections with the Imperial Japanese Navy and took care to couch their activities in terms of the national strategic interest. As a result the Japanese government increasingly found itself drawn into island sovereignty disputes with neighboring countries. Drawing on Anna Tsing’s concept of “spectacular accumulation” (Tsing, 2004), I show how Japanese guano prospectors and naval officers performed the “effect of the state” (Mitchell, 1991) on disputed islands, hoping to convince both domestic and foreign audiences to support their claims. The process culminated in Japan’s formal annexation of the Spratly Islands in 1939, a small but significant turning point in the escalation of World War II in Asia. Parallels with contemporary disputes in the region are instructive.

Paul Kreitman is Assistant Professor of 20th Century Japanese History at the Department of East Asian Languages and Culture at Columbia University. His research interests include environmental history, global history, commodity history, and histories of science and technology. He received his PhD in History from Princeton University in 2015, with a doctoral dissertation entitled “Feathers, Fertilizer and States of Nature: Uses of Albatrosses in the U.S.-Japan Borderlands”. He is currently working on a book manuscript exploring the relationship between resource extraction, nature conservation and state formation in the North Pacific. His second project examines the political ecology of excrement in the Greater Tokyo area, focusing on the slow obsolescence of night soil fertilizer over the course of the twentieth century. Paul received his BA from the University of Oxford in 2006, after which he worked as a carbon offset consultant at Mitsubishi UFJ Securities in Tokyo. He joined Columbia after a postdoctoral fellowship at the University of London’s Institute of Historical Research, jointly affiliated with SOAS.