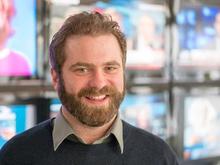 Abstract: Consumer messaging is ubiquitous in everyday life. Two sets of experiments investigate whether such messages can affect politics and policy. In one experiment, a health care cooperative funded by the Affordable Care Act delivered messages consistent with consumer fairness norms. A different set of experiments tests whether non-political advertising can affect political attitudes. The results from both experiments are consistent with the proposition that consumer messaging can shape policy uptake and political attitudes. Implications for the study of political preference formation are discussed.

Ethan Porter is an assistant professor at George Washington University in the School of Media and Public Affairs. His research has appeared or is forthcoming in Proceedings of the National Academy of Sciences, Journal of Politics, Political Communication, Political Behavior, and Journal of Experimental Political Science. His book, False Alarm: The Truth About Political Mistruths in the Trump Era, co-authored with Thomas J. Wood, has just been released by Cambridge University Press. He received his PhD in Political Science from the University of Chicago.